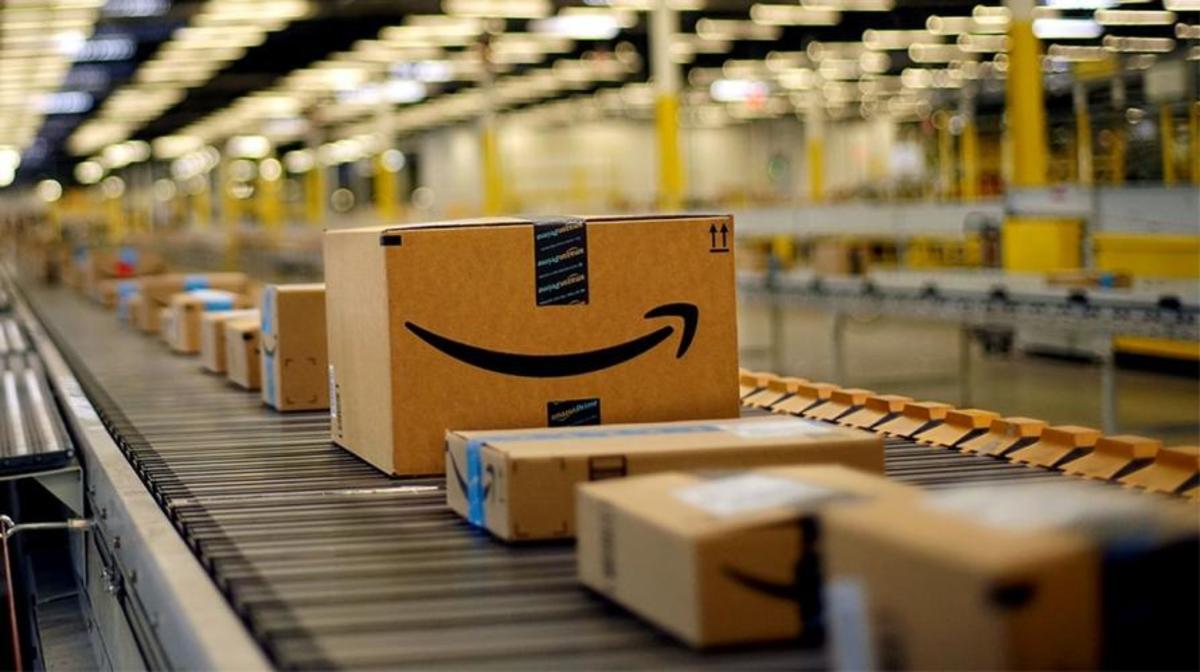 In the recent first quarter of 2022, Amazon stock reported mixed results. The company fell short on its earnings but did match expectations for revenue. This was the first time in at least four years that the company reported a net loss.  Furthermore, Amazon also expects slower outlook growth of between 3% and 7%. This has definitely raised concerns for some investors and thus Amazon stock have took quite a beating and have decreased over 28%.

The company saw 30-40% expansion in revenue growth in 2021. Like many tech giants, the company is attributing the decline to macroeconomic factors as well as Russia’s invasion of Ukraine. After the announcement, the shares have plunged by about ~20+%. Have the fundamentals of the business changed? So let’s take a closer look at its main business and financial outcomes in order to better assess Amazon’s overall performance.

Amazon began as an online bookseller in 1996 by Jeff Bezos, selling books to anyone with World Wide Web access. The service was available and sold to all 50 states and over 45 countries. Within two months, the company was able to generate an impressive $20,000/week of revenue. In the 2000s, Amazon expanded its services beyond books to offer convenience, cloud computing and Amazon kindle services. Over the years, the company has also done multiple strategic acquisitions like Whole Foods, Zappos, Twitch and MGM. Today, Amazon focuses on its e-commerce, cloud computing, digital streaming and artificial intelligence business.

As an ecommerce behemoth, Amazon reigns bigger than the next 14 largest US retailers combined. While Amazon’s online stores remain its primary source of revenue, the company is also powered by several other business areas. Amazon has gradually established itself in areas such as cloud computing, internet advertising, and digital payments, in addition to retail ecommerce. 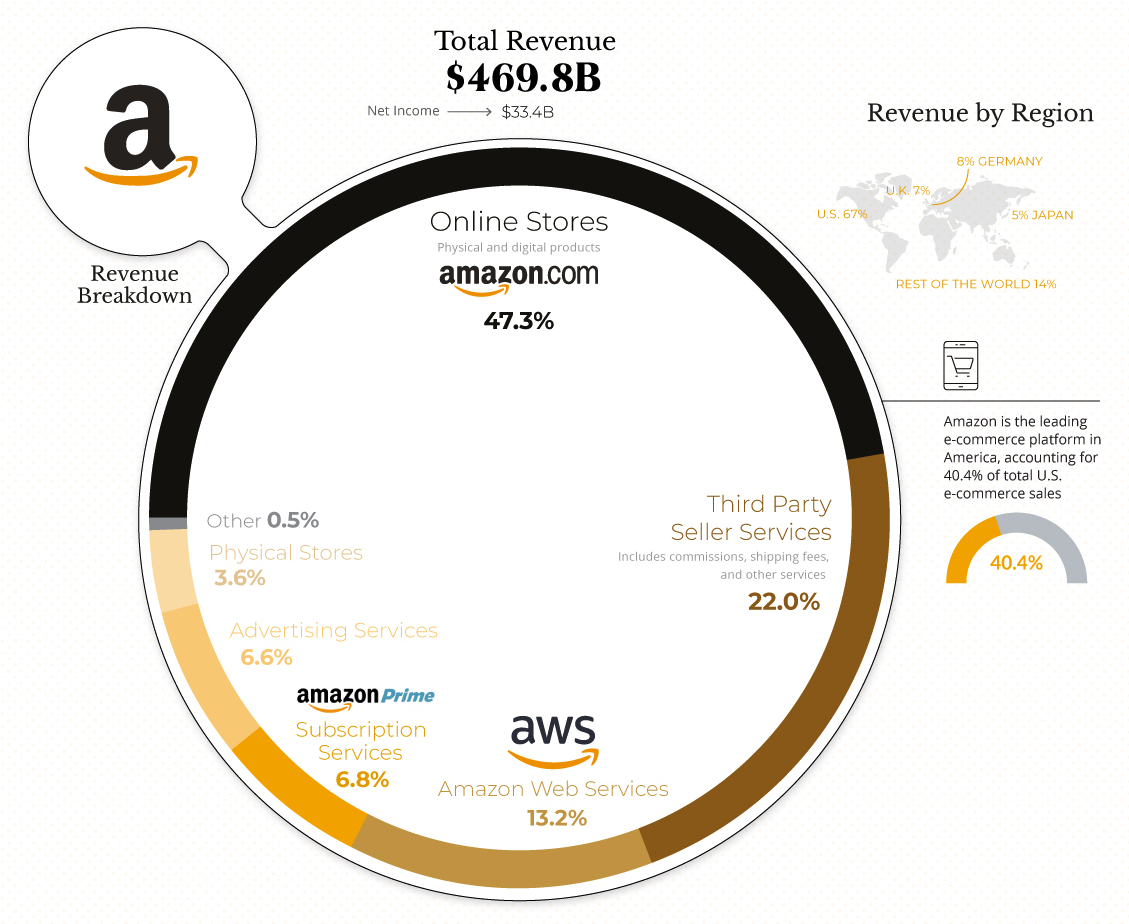 Let’s look at the qualitative aspects in order to get a more accurate assessment of Amazon’s price and value.

The network effects that result from aggregating suppliers and customers are one of the primary advantages of Amazon’s marketplace. They leverage their large network of suppliers to provide lower prices for customers. This improves the customer experience, attracting more customers and, as a result, more sellers to the platform. Whenever a new product is introduced to the marketplace, Amazon is willing to provide razor-thin margins to its vast user base. This deters competitors and has allowed it to develop from a little bookseller to a true Everything Store.

Amazon has a wide ecosystem which encompasses retail, transportation, B2B distribution, payments, entertainment, cloud computing, and other areas. Consumption of one type of Amazon product or service encourages customers to use the company’s other products and services.  Example, Amazon Prime connects Amazon’s broader retail activities together and creates stickiness with the customers. Combining Amazon products with Prime subscriptions creates high switching costs that makes consumers hard to overcome.

Amazon Web Services (AWS) is a cloud computing leader with over a million active clients and over 33% market share. AWS has an extensive global infrastructure; 69 availability within 22 regions around the world. According to Gartner, the global public cloud services market will grow 20% to  600 billion by 2023. In 2022 Q1, AWS revenue was $18.4B which grew 37% from last year. This shows that Amazon’s cloud business is still seeing tremendous growth which will contribute well to the business top line.

While e-commerce has risen rapidly in India, there is still a lot of room for growth in India. Online sales accounts for 1.6% of retail in India which pales in comparison to China (15%) and International (14%). The Indian e-commerce market is expected to hit $200 billion by 2026, growing at a CAGR of 30%. As a result, Amazon plans to penetrate into the country by investing $1 billion to help digitize businesses across India. Their goal is to onboard more than 10 million small or medium-sized businesses online by 2025.

Amazon announced the $750 million purchase of PillPack, an online pharmacy in 2018. PillPack is a full-serve pharmacy with an in-network pharmacy with major pharmacy benefit managers like CVS, Cigna and more. The U.S. pharmacy market is projected to grow from USD 560 billion to USD 861.67 billion by 2028. The increased use of the internet, convenience and increased elderly population will support growth of the e-Pharmacy market. A combination of Amazon and PillPack has the potential to emerge strong in this space.

Prime membership numbers continue to increase year on year for the company. Till date, Amazon has over 150 million paid Prime members. For an annual subscription of $119, Amazon Prime offers multiple benefits to its users.  These include same-day delivery, Prime Video, unlimited music streaming, two-hour grocery delivery and more. According to eMarketer, roughly 51.3% of US homes now have Amazon Prime membership. According to a CIRP report, prime users spend up to 2.3 times more than non-prime subscribers. Hence, having more premium customers not only ensures a steady revenue stream, but it also helps enhance marketplace sales.

Demand for Amazon products and services fluctuate due to seasonality, promotions, product launches, or unforeseeable events. Hence, it takes tremendous effort to ensure their inventory meets the ever changing needs of their customers. Failure to do so could significantly affect their revenue as well as future growth. On the flip side, if Amazon was to overstock, this will also incur inventory markdown or write-offs costs which affects profitability. Hence, the company has to carefully manage the inventory level of their products to maximise their profitability.

Amazon operates internationally and thus their product and service offerings are subject to swings in foreign exchange rates. When the US Dollar strengthens against foreign currencies, international revenues may be considerably less than projected.

Let’s look at the quantitative aspects in order to get a more accurate assessment of Amazon’s price and value.

The majority of Amazon’s revenue in 2021 still predominantly comes from their North America Services (Advertising, Prime and Digital Content). International markets account for 27% and Other Bets taking the remaining 13%.

When evaluating the financial state of a growing firm like Amazon, we must assess key financial ratios such as Revenue Growth, P/S, P/E, Gross Margin%, Operating Margin%, and FCF.

Amazon and its marketplaces have definitely come a long way to become the e-commerce leader internationally. Amazon is a great company with one of the strongest moats around. This has enabled them to gather a strong customer base and brand equity. Furthermore, Amazon does have a robust balance sheet and will continue to see strong growth in certain business segments.

Although Amazon is fundamentally a great company, its declining operating and FCF margin could be a concern for some investors. Its single digit margin pales in comparison to the other tech giants and so if you are keen to check out our article on other tech giants: Facebook, Microsoft and Google. The current price appears to be fairly valued, but I shall wait to see how management plans to grow margins in the future. As a result, for the time being, I may be inclined to invest in other IT companies with better margins.