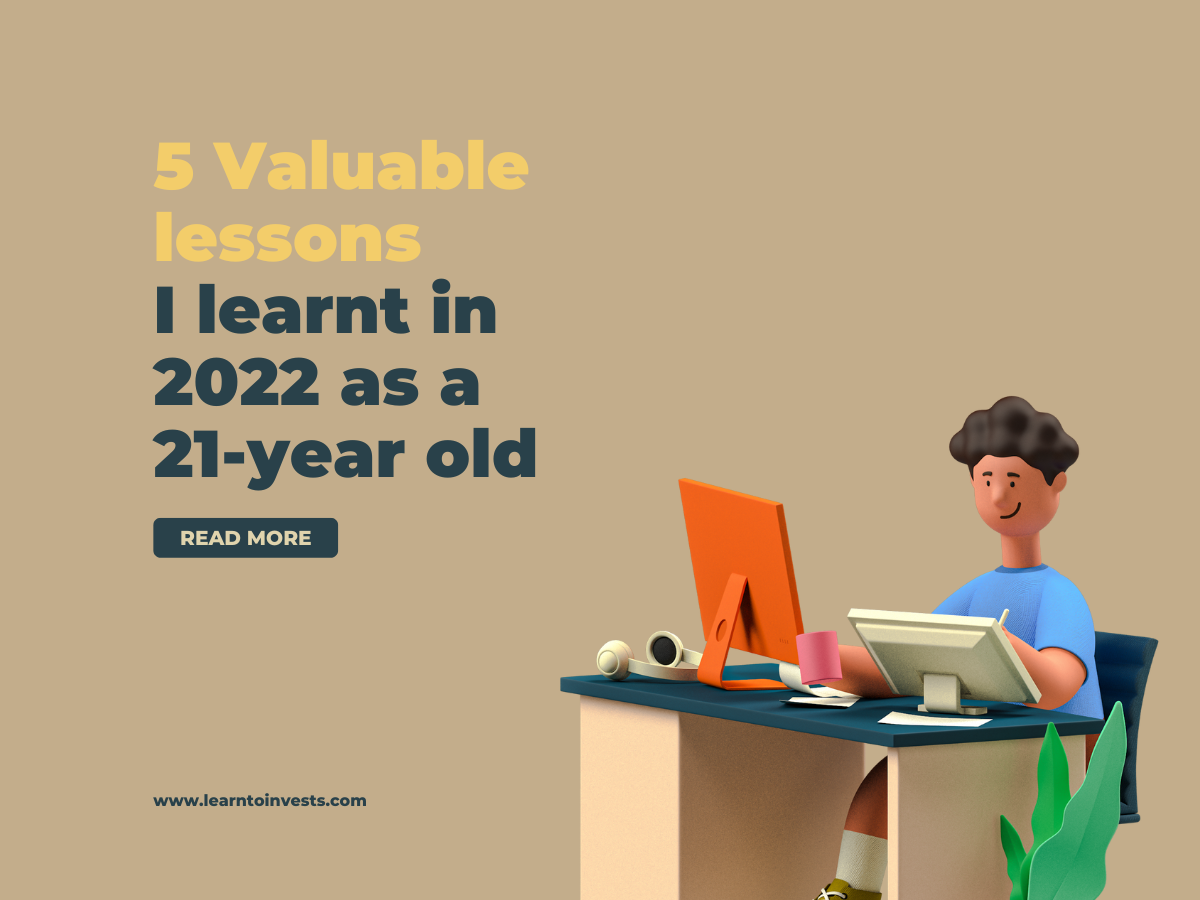 2022 was a year like none other. We witnessed the peak and down of the market, crypto market and bond market. 5 valuable lessons in 2022

2022 was a year like none other. We witnessed the pinnacle and trough of the stock market, crypto market and bond market. In the beginning of the year, a lot of people speculated about how the Fed would combat inflation. Most people would have anticipated an increase in interest rates, but few would have anticipated it would happen so rapidly.

It’s a good idea to take stock of what we’ve learned during 2022 at the end of the year. We will be able to better plan for the following year thanks to this.

Alibaba was a huge surprise to me. Having about 50% concentration of Big China Tech Stocks in my portfolio – Alibaba, Tencent and Ping An, my portfolio certainly took a hit. A rather big hit.

Awful pieces of news keep coming one after another. Here is our previous analysis on Alibaba. It all began when Jack Ma criticized China’s financial regulatory system. In many of China’s big techs, the situation started to seem dismal and uncertainty increased. I thought this China’s crackdown on Alibaba would only be temporary because I naively believed that CCP only wanted to punish Jack Ma.

Investigations into other large Chinese IT companies’ possible monopolistic practices followed as a result of this. The Chinese President Xi JinPing’s announcement that he will serve a third term as the party’s supreme leader and consequently as the head of state in 2022 was the ultimate blow to the year. Without any opposition, observers worried that the party would be made up entirely of Xi’s supporters. Additionally, this portends a future for China that is less economically liberal and gives priority to state-owned businesses.

For many crypto supporters, 2022 was a complete bust. There were many who lost their life savings. Many people supported cryptocurrency yield farming, mining, NFTs, crypto games, and other side initiatives at the beginning of this year.

Previously named Luna, they have changed to Luna Classic after the crash.

When Terra began to fall, the cryptosphere as a whole started to show indications of cracking. As a result, UST lost its $1 peg, which many in the cryptocurrency industry believed to be the “safest” option. Many customers lost 5-7 figures within the course of a week, and some lost all of their savings.

The collapse of Terra and Luna thereafter gradually set off a domino and snowball effect that pulled down another crypto lender. Celsius Network, indeed. Three Arrows Capital (3AC), a cryptocurrency hedge fund, filed for bankruptcy shortly after. According to reports, the Singapore-based 3AC had at least $10 billion under management. Su Zhu and Kyle Davies, the founders of 3AC, are still unaccounted for. Many said they took the remaining cash and fled.

The biggest and most spectacular crypto collapse in 2022 occurred with FTX. After a spike in customer withdrawals resulted in a shortage of liquidity in FTX reserves, FTX filed for bankruptcy. All of this started when CoinDesk revealed that a stolen document that Mr. Bankman-Fried’s hedge fund Alameda Research possessed an unusually high number of FTT tokens. Numerous withdrawals led to a “bank run,” which in turn created a shortage of liquidity.

Nobody anticipated 2022 to be such a “happening” year, with China stocks and cryptocurrency being a couple of the numerous events that took place. My attitude changed as a result, and now I believe that since things rarely happen as planned, we should always “expect the unexpected.”

Numerous individuals started working from home during the COVID shutdown (WFH). The entire world was also on lockdown. While many individuals are considering new hobbies, my brother and I began our entrepreneurial journey.

We choose to market monitor mounts after doing our market research. To our astonishment, we have already sold more than 500 mounts. Then, due to our passion about personal finance, we set out to start our own financial community, which is the reason you are currently reading this.

The fact that we were able to establish this community so quickly fills us with gratitude and humility. As a result, we believe that if you want to increase your income, you should look for another passive source of income. Dividend investment, another side business, or even a part-time employment are all viable choices.

The term “tech winter” is currently quite popular. According to a MOM study, there were around 1,120 layoffs in the third quarter (July – Sep). Emergency funds would undoubtedly come in handy in such situations. We shouldn’t just rely on your company’s retrenchment package, even if it exists.

Why? This could be regarded as your “bonus.”

Having this safety nest is essential because if you don’t there might be dire consequences. Some possible instances could result you:

4. Patience to Dollar-Cost Average into the market

This year’s sharp decline in the market gave me the opportunity to discover a lot about myself. Previously, I was extremely eager to invest in the stock market. This made me realised the importance of waiting. Subsequently, I was forced to watch the market decline as a result since I did not practice dollar cost averaging.

I discovered that bear markets often decline over time and in waves patterns after studying and analyzing them. Where is the bottom if it keeps declining over the long term? This remains a mystery.

At my past internships, I had some incredible mentors who taught me how to invest in tranches. Here, we invest in a certain investment at a predefined loss — it may be 15% or 20% — from the price at which you previously made the buy. Although there is no absolute standard for what is optimal, this is a solid investment rule to keep in mind.

In this manner, we won’t have FOMO (Fear Of Missing Out) or emotion over pricing changes.

5. Time is the most precious resource because you can’t get it back

I became aware of the value of time thanks to NS. For my overseas readers who may not be aware, Singaporean men who are between the ages of 18 and 21 are mandated to complete a 2-year National Service program. While many people might believe that National Service is pointless. This might not necessarily always be the case.

Personally, I would say yes— to an extent. It depends on how you spend your time, after all. Depending on how you use them, there is a lot of “admin time” or free time. Many people surf around tiktok, engage in online games, or even watch movies. It totally depends on how you want to spend your two years and at the end of the 2 years, you will know whether it is a waste of time.

On the bright side, NS instills grit and discipline, two crucial qualities. The discipline and commitment to continually curating new posts for this amazing community on a weekly basis. The grit and a desire for accomplishment, it made me understand what I like and dislike.

In the year 2022, a multitude of unexpected events transpired, including the abrupt increase in interest rates, the investigation of major Chinese tech corporations such as Alibaba, and the downfall of various cryptocurrency firms. These occurrences prompted me to reflect and derive several valuable lessons. Some of these lessons include the importance of being prepared for the unforeseen and diversifying one’s investments, as well as the significance of establishing a passive income stream. I also emphasize the necessity of staying informed and making discerning decisions in your portfolio, particularly in times of unpredictability.

If you are keen, check out our other latest articles. Trust Bank Referral, SCB Card Deals and Top 5 Savings Accounts in Singapore 2022.

Disclaimer: The information provided by LearnToInvest serves as an educational piece and is not intended to be personalized investment advice. ​Readers should always do their own due diligence and consider their financial goals before the usage of these products. We do not offer any warranty or assurance regarding the quality of these services or goods.