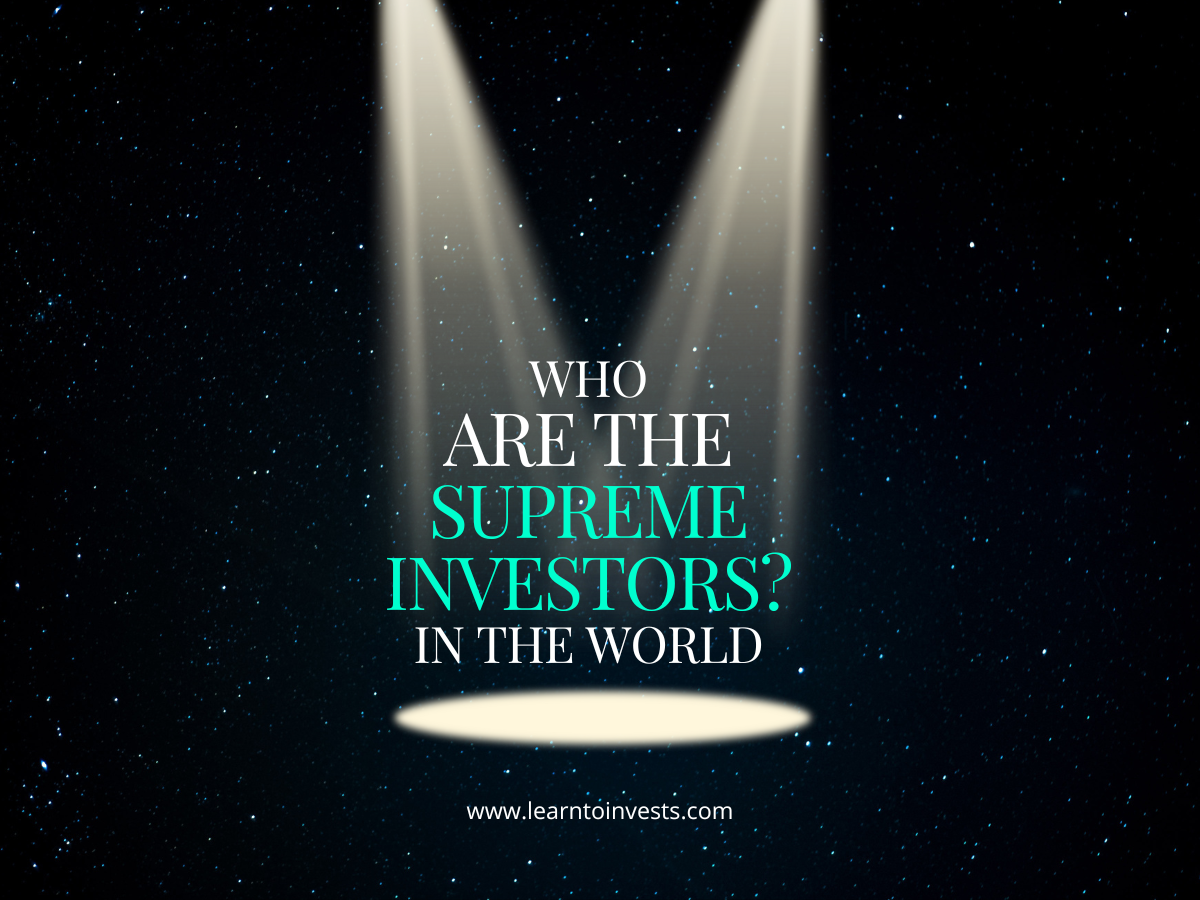 The Supreme Investors are a group of successful and experienced investors which share their knowledge, experience and resources.

Who are the Supreme Investors?

It’s a legitimate question that many amateurs as well as experienced investors ask.

The answer is quite simple – they are the ones who have mastered the art of investing and have used their expertise to become successful investors. Today, we will be exploring who the Supreme Investors are, what skills they possess, and how you can learn from them. We will delve into the secrets of their success by looking at their strategies and tactics that have enabled them to become wealthy in a relatively short amount of time. So, if you’re looking for some new ideas on how to invest your hard-earned money more wisely, then this blog post is for you!

Benjamin Graham is considered by many to be the father of value investing. He was born in 1894 and began his career as a journalist before moving to Wall Street. In 1926, he founded the firm Graham-Newman Corporation, where he employed a value investing strategy.

Graham’s investment philosophy is centered on the idea of finding stocks that are trading for less than their intrinsic value. He believed that if you could buy a stock for less than its true worth, you would be able to make a profit in the long run.

Graham’s ideas have influenced some of the most successful investors of all time, including Warren Buffett.

Jesse Livermore was one of the most successful traders of his time. He made a fortune in the stock market by correctly anticipating market movements and then acting on his predictions.

Livermore began his career as a runner on the floor of the New York Stock Exchange. He quickly developed a keen sense for spotting market trends and soon began making trades himself. Over the years, he honed his skills and became one of the most respected traders in the business.

While Livermore did suffer some major losses during his career, he always managed to come back stronger. In fact, it was these losses that taught him some of his most valuable lessons about risk management.

Today, Livermore is considered one of the greatest traders of all time. His story is an inspiration to anyone who wants to make a success of themselves in the financial markets.

Peter Lynch is an American Investor, former stockbroker, and mutual fund manager. As of January 2019, he is a research director at Fidelity Investments. He is the author of several books on investing, including “One Up On Wall Street” and “Beating The Street”.

Lynch made his name as a stock picker during his thirteen years as portfolio manager of the Magellan Fund at Fidelity Investments, where he averaged a 29.2% annual return before retiring in 1990. His investment philosophy, which stresses finding companies with strong fundamentals that are undervalued by the market, has been influential for many individual investors and money managers.

George Soros is one of the most successful investors in the world. He is known for his investment in hedge funds and his philanthropy.

Soros was born in Hungary and escaped the Nazi occupation of Hungary during World War II. He later moved to the United Kingdom, where he studied at the London School of Economics. After graduation, he began his career in finance.

In 1992, Soros made headlines when he bet against the British pound and earned a billion dollars in profits. He is also known for his philanthropy, donating billions of dollars to causes such as human rights, education, and public health.

Warren Buffett is one of the most successful investors in history. He is the chairman, CEO, and largest shareholder of Berkshire Hathaway, a conglomerate holding company with interests in a variety of businesses.

Buffett is known for his value investing philosophy, which he has applied to his investing strategy with great success. He is also known for his simple and folksy style, as well as his wit and wisdom.

Buffett has been consistently ranked among the world’s wealthiest people, and he is currently the second-richest person in the world with a net worth of over $82 billion.

The Supreme Investors are a group of successful and experienced investors who have come together to share their knowledge, experience and resources in order to help others achieve financial freedom.

There is no hard and fast rule in investing. It is more of a journey for you to understand yourself with money as an intermediary. Thus, as what many will say, “Invest in companies which you can sleep well”.

Through their innovative approach, they can provide guidance and assistance for those looking to invest wisely and responsibly. Whether you’re just starting out on your journey or if you’ve been investing for years, the insights offered by The Supreme Investors can be invaluable as you strive towards success with your investments.

If you are keen, check out our other latest articles. Trust Bank Referral, Putting together a Robust Financial Plan for 2023 and Best 2023 Citibank credit card deals.

Disclaimer: The information provided by LearnToInvest serves as an educational piece and is not intended to be personalised investment advice. ​Readers should always do their own due diligence and consider their financial goals before investing in any stock. All views expressed in the article are the independent opinions of Learn To Invest.